London Under: The Secret History Beneath the Streets
Peter Ackroyd 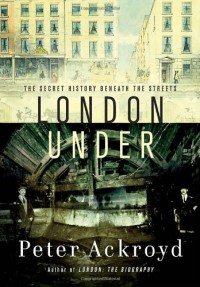 "Tread carefully over the pavements of London for you are treading on skin, a skein of stone that covers rivers and labyrinths, tunnels and chambers, streams and caverns, pipes and cables, springs and passages, crypts and sewers, creeping things that will never see the light of day." (p. 1)

"The bombing of the Second World War marks the emergence of proper archaeological investigation in the city. The bombs destroyed London's present but helped to rebuild London's past. They revealed Roman London, for example, and the extent of the great Roman wall around the city became known." (p. 20)

"The presence of holy water induced various forms of theatre and ritual in its vicinity, perhaps in memory of earlier water cults and ceremonies. The Clerks' Well and the Skinners' Well close to one another in Clerkenwell, for example, were the site of the London mystery plays in the late medieval period. The well of the clerks can still be seen, behind a glass window at the turning of Farringdon Lane into Clerkenwell Green. Some broken stone steps lead down to the well, from which many generations of pilgrims or travellers drank." (p. 32)